LOYALTY – the forgotten word in the workplace 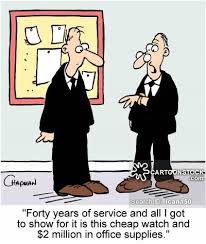 If your company did not have an office party during the past holiday season you are not alone. More and more companies are deciding not to have the usual end of year celebration that was so big a part of the American culture in the past.

A recent study performed by the Society for Human Resource Management reveals that almost 1/3 of H.R. professionals surveyed stated that their organization does not have yearend parties for the employees. This is the largest percentage to date since the survey began in 2009. And the reason is not primarily due to financial restrictions as one might assume.

Only 6% of the companies surveyed this year cited budgetary retrains as the reason for nixing the traditional office party as compared to 20% back in 2009 and 2010. So if it’s not due to the expense why are so many companies choosing not to follow the age old tradition of the holiday office party? Perhaps it’s a change in the way that employers and employees view each other’s roles towards one another.

There was a time in America that the employer was looked upon almost as a father figure of sorts. Employees knew the owner and top management and considered them as authority figures that could be counted on in times of crisis. Asking for financial assistance during an emergency was quite common but today that has all changed. Today the “personal” relationship between employer and worker is all but nonexistent and “strictly business”. An employee’s problems are their own and asking help from management for a personal problem is almost always frowned upon and more often than not, denied.

Also gone are the days of holiday bonuses. Today it is true that some of the larger companies do provide bonuses on a “performance” basis but the old thought of simply providing all workers with a holiday bonus has gone the way of the dinosaurs - again a result of the changing relationship between workers and their employer. The time of “loyalty” to the company and receiving the same in return is quickly becoming a thing of the past. Most bonuses today are merit based if they exist at all.

The most surprising statistic for me was the fact that 32% of the H.R. pro’s surveyed stated that it was not OK for employees to use their work computers for gift shopping during the holidays even on their lunch break. Only 13% said that this would be acceptable. Yes, times have changed dramatically in the workplace and I wonder if it’s for the best.

http://www.sellcvilleandrvahomes.com/
Posted by Unknown at 11:51 AM