47 cents for a gallon of gas? Are you kidding me? 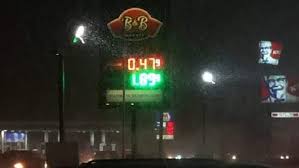 Can you believe it? Gas for less than a buck right here in the good ole’ U.S.A.! It’s a fact. According to GasBuddy last Sunday in Houghton Lake, Michigan there was a big battle raging. Not one with bullets and missiles but a price war that had everybody scrambling for the car keys!

It lasted for less than one day but during that time residents reporting seeing prices at various gas stations at 95 cents, 78 cents and incredibly 47 cents a gallon. As you can well imagine the mad rush to fill up the tank created quite a stir and as a result police were called in to help direct traffic. Later the same day gas prices rose back up to an average of about $1.50 per gallon but a lot of happy motorists filled their tanks to the top with a smile on their face.

Across the nation the average last week had dropped to $1.94, 6 cents cheaper than the previous week according to cars.com. Currently a barrel of oil is now below $29 which is the lowest price in more than a decade. Let’s hope this continues!

http://www.sellcvilleandrvahomes.com/
Posted by Unknown at 11:34 AM