And you thought the roads in your area were bad! 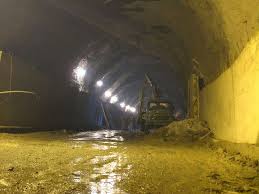 Sometimes we just don’t know how good we’ve got it! Each and every one of us has complained when we’ve hit a big pot hole in the street or road construction is killing our drive to work but nothing can compare with the Anzob tunnel in Tajikistan.

The tunnel was constructed to make the trip between major cities easier and safer. Before it was built drivers had only a dirt road to travel between the capital city of Duschanbe and the 2nd largest city of Khujand. Year round avalanches made this trip extremely dangerous and at times the only way to travel between the two cities was by plane. The solution? A 5km long, $4 billion dollar tunnel, or so it was thought.

Although the tunnel was opened in 2006 it is still unfinished to this day and has proven to be just as treacherous as the dirt road that it was intended to replace. It is now known as the “tunnel of death’ and for good reason. To begin with there are very few lights inside and the only ventilation throughout the entire length of the tunnel is 1 ventilation fan. In fact, many people have died from carbon monoxide poisoning after being stuck during a traffic jam.

Then there are the huge potholes (some big enough to almost completely swallow your car) that turn into mini-lakes due to the tunnel’s ongoing flooding problem. Yes, the tunnel floods even when the weather is good and the inadequate drainage channels are also a hazard to motorcyclists. To complete the recipe there is the hazard of falling rocks and keep in mind that this is only a 2 lane tunnel. Avoiding any of these hazards often means swerving into the oncoming traffic lane. Can you even imagine driving under these conditions?

If you’d like to see some actual video that was recorded by a driver passing through the tunnel you can view it here. So the next time you hit the same pothole for the 17th time or are tired of being held up by never ending road maintenance, keep in mind; it could be much worse!