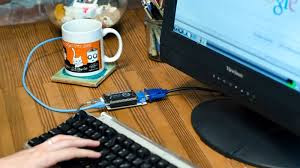 Sound too good to be true? Well, it isn’t! The truth is that a $9 computer does exist and it can do just about everything that an expensive computer can do, although admittedly, a bit slower.

An American/Chinese company known as Designed by Next Thing and a chip manufacturer also located in China (Allwinner Technology) have joined forces to produce this incredibly affordable mini-computing system. It boasts a fully functional operating system as well as pre-installed applications for photo and audio editing, word processing, web access, and email. And that’s not all; it also has Bluetooth and Wi-Fi capability built in! The included media player also allows one to simply plug in to external equipment to view (and hear) video and music!

Admittedly this may not be the “machine” for high end viewers but just imagine the implications of such an affordable computing system. Suddenly persons all around the globe can afford a computer. If you’ve never visited a 3rd world country (I have) than you can’t even imagine what a luxury any computer would be for the “average” person.

Computers have already changed the world. Think of all of the YouTube videos posted by persons that have a cell phone with a built in camera and access to a computer and the internet. We can see what really happens in countries around the world that the major news networks would never show. In fact, they couldn’t because they aren’t the one with the raw footage. The truth is that the internet has changed our perception of the world in general and the more we see, the more we learn.

Did you know that YouTube is one of many banned internet sites in China and some other countries that control what the general public is allowed to view? We all remember the famous video footage of Tiananmen Square when a sole protesting college student was brutally run over by a Chinese military tank. Imagine all of the other “truths” that the world would see if millions more people had access to a computer.

I have no doubt whatsoever that information is power and affordable computers such as this will again change the world as dramatically as the internet did when it first became available to us.
Currently there are more than 1 million dollars worth of orders that have been placed by the general public for the “Chip”. I imagine that as more people discover it’s availability that these numbers will skyrocket and we will see a huge increase of the internet community members around the entire globe.

http://www.sellcvilleandrvahomes.com/
Posted by Unknown at 1:36 PM