Will someone please “eggsplain” the truth to me? 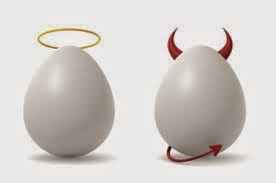 Alright, I have had just about enough of this controversy! For years I have been hearing about how unhealthy eggs are to eat, then healthy, then unhealthy, then…… well, you get the point. I can’t take it anymore. How can something that is so nutritious and full of protein be so bad for us?

It’s beginning to remind me of the infamous “second hand smoke report” that came out years ago. Remember that one? I think I was eating an egg sandwich the first time I heard it while my uncle was smoking a cigar. As I recall, studies showed that 2nd hand smoke was actually more harmful than the smoke being inhaled by the person with the cigarette. Really? I mean, REALLY? Isn’t the person smoking the cigarette inhaling both? I would assume so unless they take a puff of their cigarette and run for the hills before taking their next breath.

If I saw a smoker behaving in such a manner I would assume that he required psychiatric help, was drinking or maybe, just maybe had too many eggs for breakfast (or possibly lunch if he were a single man). So now that we all agree that smoking the cigarette is more harmful that not smoking it, what about this egg thing?

Now the latest study indicates that eggs reduce the risk of breast cancer in women by 24% but increase the chance of death for middle aged men! The exact quote from one study was “egg consumption of up to six eggs a week was not associated with the risk of all-cause mortality, consumption of (seven or more) eggs a week was associated with a 23 percent greater risk of death.” Did you read that carefully? “All-cause mortality”? Doesn’t that mean death by any possible means? Unless I miss my guess, if a middle aged man dies for any reason (such as a terrible Twinkie choking incident) chances are he chose to eat more than 6 eggs a week.

Oh, one final point to be made about the latest survey; researchers did state that further study was needed. Oh good! I’d hate to think that there’d be no startling revelations about eggs in the future. I mean, how could I possible continue my traditional “Sunday morning scrambled egg family get together jamboree” with a clear conscious if some report didn’t tell me it was OK?