What if it all just suddenly went away? 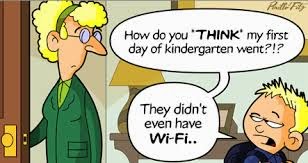 Yes, there was a time that everyone did not have a cell phone, tablet or computer available to them at any given moment. It might interest some of the younger readers to know that there was a time that none of these things existed.  Life was much different than it is today. There was no Google search but there was something called a library. GPS? Never heard of it! Back in the day if you were lost you would stop at the nearest gas station for directions or get to a pay phone. Yes, a pay phone. That was a phone (usually located outside on the corner) that you could drop a dime in and make a local call.

Today we depend more on gadgets than other people. What would we do without television, computers and our ever trustworthy iPhone? While we use these devices to communicate with others it’s not the same as looking at someone’s face during a conversation. As far as I’m concerned texting, talking on the phone and using the various social websites is more like talking at people, not to them. The personal touch is not there and sometimes it causes us to say or do things that we probably wouldn’t do if the person were sitting in the same room with us, but I digress!

So, what was life like before all of this technology? Here are some examples of everyday things that people did but no longer do:

Wait at home for phone calls
Yep, if you were waiting for an important call you stayed at home! Before mobile phones you had to be home to get a call. If you weren’t there you missed it. Eventually new things were invented such as the answering machine. That was a recording device that took a tape and allowed people to leave a message if you didn’t answer the phone.

After that we had something “Caller ID” that allowed us to see the phone number of the person that was calling and also kept a record of missed calls. At least that way you knew what calls you had missed when you weren’t home. By the way there was no such thing as call waiting back then either. In other words if someone was using the phone when your important call was coming in, you didn’t even know it! The person calling would hear a “busy tone” (beep, beep, beep, beep) and had no way to let you know they were trying to call you. There was no voicemail yet either!

Handwrite everything!
Doing homework back in the day took on a whole new meaning. Without computers (or even the old style typewriters) people wrote down everything with pen or pencil on something called paper! Today’s young folks will never know the agony of a good old fashioned hand cramp after writing a 5 page book report for school. If you wanted to get someone’s phone number or give them yours, you wrote it down. If there was something important that you needed to remember, you wrote a note and placed it on the refrigerator. Shopping list for the store? You guessed it! You wrote it down and took it to the store. If you had “bad” handwriting in those days, you had a problem!

Get your photos “processed”
Here’s something that the very young know absolutely nothing about. Before computers, digital cameras and cell phones taking photographs was done the old fashioned way. Cameras used something that was called “film” in order to take a picture. After you had used up all of the film (usually 24 photos on a roll) you had to take it to a special store that could perform the secret miracle of turning the film into actual photographs that you could see.  Keep in mind that somewhere in a lab a complete stranger was seeing all of your pictures before you did! Kind of creepy, huh? And if you had bad pictures there was nothing you could do about it. Today you can use your computer to fix things such as dark pictures or red eye but back then the pictures that you took were the pictures you were stuck with. Oh, did I mention that it took at least 24 hours for your pictures to be ready at the store?

Go to arcades and video stores
There was a time before cable TV or video/computer games. If you liked to play games you would go to your local arcade (usually located in a mall) and start dropping quarters. If someone else was using the machine you wanted you simply had to wait. Sometimes you didn’t even get a chance to play. This hobby could get pretty expensive too. It was quite easy to spend $5 or $10 in only an hour or two and that was a lot of money back in the 70’s!
As far as watching a movie to pass the time most places did not have cable or satellite TV and you went to the movie theatre like everyone else. Finally something called a VCR (Video Cassette Recorder) was invented and you could then go to your local video store and “rent” a movie that you could watch at home. My father loved it and could not get over this new and exciting technology!

Use address books
Remember what I said earlier about writing everything down? Well, before we had cell phones we needed to keep a record of everyone’s phone number and address so we had an address book. No, not like the “electronic” address book in your phone but more paper! My mom had a deluxe version of this all important recording device. It was leather bound and actually had her name embossed on the front. It was a Christmas gift from dad and kept him in her good graces right up to Valentine’s Day. Not everyone had as nice an address book as mom did.

The unspoken rule was that you could only use a pencil and never a pen to write in the book. What if someone moved to a new place or changed their phone number for some reason? You couldn’t just change the info. If it was written in ink, could you? You would need to cross out the old number and write in the new one and that just wouldn’t do in mom’s deluxe, personalized address book.

I can think of many other examples of what life was like before all of this technology existed but there is a point I’m trying to make here. Did you ever stop to think what would happen if it all suddenly went away? The world would be a very different place and we would all need to start talking to each other in person and not through an electronic device. I’d miss all of my gadgets but maybe, just maybe there would be some advantages too.

http://www.sellcvilleandrvahomes.com/
Posted by Unknown at 12:11 PM