The 10 most expensive toys in the world - UNBELIEVABLE! 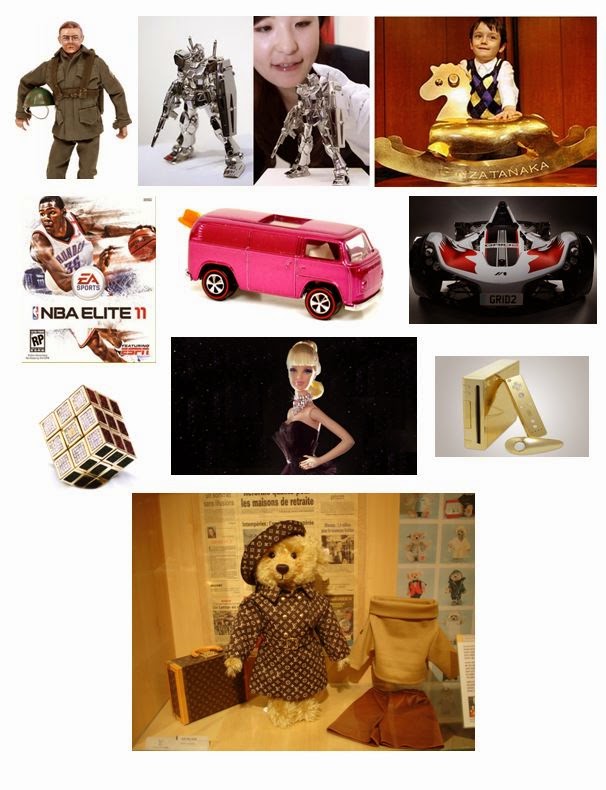 We all have fond memories of our childhood and a big part of that are the toys that we used to love. Long before video games, computers or MP3 players there were tons of wonderful toys and games that kept us little tikes happy (and occupied) for hours on end. We don’t usually associate toys with money but there are some rare items that are literally worth a fortune. Can you guess what they might be?

10. Mint Condition First Design NBA Elite 11 Price: $2,250 (and soaring) By Electronic Arts
It’s no surprise that a video game would make the list for one of the most expensive games in the world. It’s hard for me to imagine paying this much money for any game but what do I know?

9. Grid 2: Mono Edition with Toy Car Price: $18,592 By Codemasters
While the standard version of this PlayStation 3 game sells for a modest $32 - $53, the Mono Edition includes the gaming console and the supercar pictured here capable of speeds up to 170mph! Anybody want to race?

6. Gundam Fix Platinum Toy Robot Price: $250,000 By Bandai
This Japanese toy maker wanted to make the most expensive toy robot in the world and did just that in 2007. The entire robot is made of pure platinum and the eyes are real diamonds. Although valued at a cool quarter of a million dollars it is not for sale.

5. Nintendo Wii Supreme Price: Around $485,000 By Goldstriker International
The Wii game system has been a big hit for some time now. Even I have enjoyed playing this with the kids from time to time! You can upgrade your system to this “Supreme” version for a very reasonable $485,000. It’s gold coated with 2 ½ kilograms of 22-karat splendor and of course the front buttons are adorned with no less than 78 quarter cut diamonds. I wonder what it costs to service it?

4. Cubism Style Barbie Price: $ 551,000 By Mattel and Stefano Canturi
I think that by now the name |Barbie” is just as famous as McDonalds around the world. This one boasts real diamonds and one of them is a rare 1 carat pink diamond from the Australian Argyle Mine. It is in fact a collector’s item.

3. Gold Rocking Horse Price: $1.28 million By Ginza Tanaka Designs
Rocking horses have been around since before our great grandparents time but not quite like this one! You guessed it, it’s solid gold and weighs 80 pounds. It is currently owned by Blue Ivy Knowles Carter, the daughter of none other than Beyoncé and Jay Z.

2. The Masterpiece Cube Rubik’s Cube Price: $1.5 million By Diamond Cutters
Behold the most expensive Rubik’s Cube in the world! It is fully functioning but I wouldn’t let anyone touch it. Each of the 4 sides contain 185 carats of the most precious gems in the world including emeralds, rubies and amethysts. I can’t even figure out the $5 version!

1. Steiff Louis Vuitton Teddy Bear Price: $2.1 million By Steiff Stuffed Toy Company
Well, we finally arrive at the most expensive teddy bear ever to exist. It was designed and made by renowned German toy manufacturer Steiff. It was sold for this amazing price at auction in the year 2000. Not surprisingly, Steiff is famous for its hand crafted designs, but $2.1 million? Maybe I need to dig out my old Teddy Ruxpin!

http://www.sellcvilleandrvahomes.com/
Posted by Unknown at 11:44 AM