Did you know there is food in your home that can kill you? 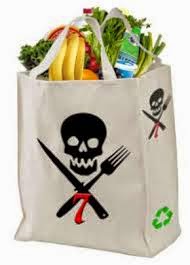 Believe it or not everyone has some type of food in their kitchen that is potentially deadly. Sound hard to believe? I can assure you it’s completely true. Below are 10 foods that have the potential to be lethal if too much is digested at one time. With the holidays just around the corner now is a great time to increase your awareness of what you put into your body and serve to friends and family.

Nutmeg
If you enjoy cooking all of those delicious holiday treats that this is a spice you have probably used many times. You should know that nutmeg is a hallucinogenic. It is said that eating an entire nutmeg can actually produce a type of psychosis. How much is safe to consume? Less than 2oz is considered a “safe” dosage by most experts. I have eaten this many times and not had a problem but the fact remains that it is possible to overdose on this very popular spice.

Almonds
Sweet almonds are completely safe but bitter almonds contain hydrogen cyanide, yes, cyanide. If eaten raw an average of 7 – 10 almonds can be bad for adults and lethal to children. Your best bet is to buy roasted or cooked almonds or to cook them yourself. Who knew?

Apple Seeds and Cherry Pits
The same as almonds, there is a type of hydrogen cyanide known as prussic acid in the pits and seeds of these fruits. Peach and apricot pits also contain this toxin so it’s best to simply throw them away after consuming the fruit.

Potatoes
The leaves, stems and sprouts of potatoes contain something called glycoalkaloids. If potatoes are stored in the light this chemical can spread into the part that you eat and can lead to cramping, diarrhea and confused headaches. 3-6mg for each kilogram of your body weight can cause coma or even death. If you see a potato with that “green hue” to it, throw it away.

Tuna
You’ve probably heard the rumor that tuna contains high amounts of mercury. Well, it’s no rumor, it’s true. While not immediately lethal, mercury can cause a host of problems in people including possible insanity. Tuna is fine but don’t overdo it. As a special note, the FDA recommends that pregnant women and children should not eat any tuna whatsoever.

Cashews
Ah yes, a favorite snack at this time of year! You should be aware that cashews contain a chemical that is also found in poison ivy, namely urushiol. Cashews are perfectly safe if steamed before consumption. What about those “raw” cashews that you can buy in the store? Actually they are not raw, they have been steamed. If eaten raw one could have the same symptoms as having been exposed to poison ivy. If you are allergic it could be fatal.

Rhubarb
Studies have shown that the oxalic acid found within rhubarb leaves can cause kidney stones. 11 pounds of the leaves can be fatal but of course no one eats that much at one time.

Raw Honey
Unpasteurized honed (raw) contains grayanotoxin which can lead to dizziness, weakness, excessive sweating, nausea, and vomiting. Just one tablespoon of this chemical is enough to cause these symptoms so use sparingly.

Cassava
Cassava is a tropical vegetable native to South America. Be warned, both its leaves and roots contain high amounts of cyanide. It is used in Africa to produce a popular local drink known as piwarry. I don’t know if it is available here in America but it can be very dangerous if not prepared correctly. Of all the items on this page this is one that might be best to avoid all together.