Should real estate agents be allowed to use drones for aerial photographs? 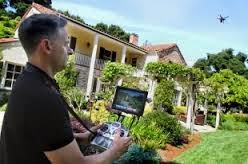 Perhaps drones are most well known for their military applications today but these modern marvels of technology are being used for many commercial applications that you may not be aware of. One example of this would be the aerial photograph of a property for sale, especially if it is a large property or estate.

There was a time that the only way to obtain an “overhead” view of a large property was to pay a considerable fee to an aerial photographer. This was nothing more than a high definition photograph taken from a plane equipped with a special camera that was developed for this very reason. There are a number of businesses that still provide this service today. Although quite reasonably priced, the cost can be prohibitive if you require photographs of numerous properties such as a real estate agent might need for marketing purposes.

Today it is possible to obtain aerial photographs of a property by simply flying a drone overhead that is equipped with a digital camera. In fact, this is already being done in numerous other countries. As with all new technology, there are legal questions that arise. Recently in Australia a situation arose where a woman complained that an overhead drone that was being used for this very purpose took pictures that included her while she was sunbathing topless on her own property. She also claimed that these pictures appeared in local advertising that was published by the brokerage representing the seller.

Currently in the U.S. the use of unmanned vehicles (drones) for such purposes is not allowed by the F.A.A. (Federal Aviation Administration). However, in March of this year an administrative judge for the National Traffic Safety Bureau ruled against the F.A.A. He stated that such a ban on the commercial use of drones is not legally enforceable. In return the F.A.A has made an appeal in the courts against that ruling and has implemented procedures that would actually fine any real estate (or other commercial enterprises) seeking to use drones for any type of commercial purpose.

As is so often the case with new technology, the debate continues. The real question here is about privacy. Clearly it was wrong for pictures containing a topless sunbather to be made available to the public, but is it wrong to use drones for such purposes? One would think that aerial photography from a plane (or satellite) flying overhead could easily create the same scenario.

I feel that today it is impossible to expect the same level of privacy that our parents and grandparents may have enjoyed. That’s not to say that I necessarily agree or disagree with any particular use of technology but I do realize that times have changed. We all know that we are being “watched” by countless security cameras at the mall or even outside in many modern downtown areas today, but in our own back yard?

Whether we like it or not, once we walk out our front door there is a good chance that someone is observing us but I personally “draw the line” when it comes to being observed in any way in the sanctity of my own home.

http://www.sellcvilleandrvahomes.com/
Posted by Unknown at 11:12 AM