What do you think of the new Apple Watch? 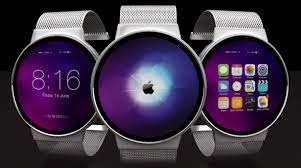 As you probably already know Apple announced the soon to be released Apple Watch on Tuesday. I’ve seen several pictures on the internet already and it is nowhere near as bulky or cumbersome as one might have expected. It is basically the size of a standard watch but of course that’s where the similarities end.

There are 3 different versions of the watch; the standard model, a “sports” version and an upgraded model made from 18 karat gold if you’re so inclined. All 3 models are touch screens but due to the limitations of its small size some of the old familiar navigational controls (such as zoom) are accessed by what looks like the winding gear on the side of the watch. Swiping and scrolling are easily done using the touch screen and there is a good variety of different watchbands as well as watch faces allowing the user to create their own distinct look.

But the real question is, “What can it do”?
Actually the Apple Watch can quite a bit but as with all modern electronics I find some of its capabilities to be a bit frivolous. For example, you can send your heartbeat to another watch wearer or draw a picture on the touch screen to share with them but I don’t see me using these features any time soon.

One feature that I do like is the built in walkie-talkie capabilities. This could really come in handy when trying to locate someone in the mall or at Disneyland but I haven’t seen any specs as to the working distance of this feature. If it’s the same as the old Nextel walkie-talkie feature than it will work country wide but may not work well indoors the same as any cell phone. I still like this feature however and can see many uses for it in lieu of making an actual phone call or sending a text.

If you’re into health and fitness than the new device might just become your best buddy! It can track your heartbeat, how many steps you’ve taken during your daily walk (or run), count how many calories you’ve burned and even how long it’s been since you last stood up. Apple states that based on this information the watch can even make “suggestions” as to how to improve your fitness goals. This information is shared with the fitness application if you have it on your iPhone 5 or 6. Pretty cool.

To keep you in touch with the rest of the world the Apple Watch has all of the usual functions but will also include updates from your Facebook account or even the latest baseball scores. If you are the proud owner of a BMW you will be able to locate your car if you can’t remember where you parked it and at least one hotel chain has an app that will allow you to unlock the door to your hotel room using the device. The same as the new iPhone 6 you will be able to pay for certain purchases with a simple tap of the touch screen as well.

One of the more innovative features of the watch is the ability to use GPS without the need to look at a screen or even listen to a voice giving directions. One “type” of vibration will tell you when it’s time to make a left turn and a different vibration will inform you that it’s time to make a right turn. If this feature works well it could help drivers to keep their eyes on the road and possibly make driving a safer experience. I’m all for that.

Charging the watch is quite simple. All you need to do is plug in the charger and place the magnetic cord on the back of the watch; no more fumbling to fit the charging cord into a tiny hole. And just in case you were wondering you can actually “talk” to your watch using a variety of different voice commands.

There are some drawbacks
As cool as the new Apple Watch seems to be there is one important thing that Apple did not mention during the unveiling on Tuesday. There was no mention of battery life or how long it takes to charge the unit. This is something that I would need to know if I were considering buying the new device.

Finally, there’s the biggest drawback of all. According to Apple most of the features of the new watch require an iPhone to work. Although you won’t need the new i6 you will need at least an i5. I find that to be rather disappointing. Since I’m not sure what features will work independently it’s hard to make a decision as to whether or not this “additional” device would be useful in my day to day activities.

The watch will be available next year and the retail price will be $349.