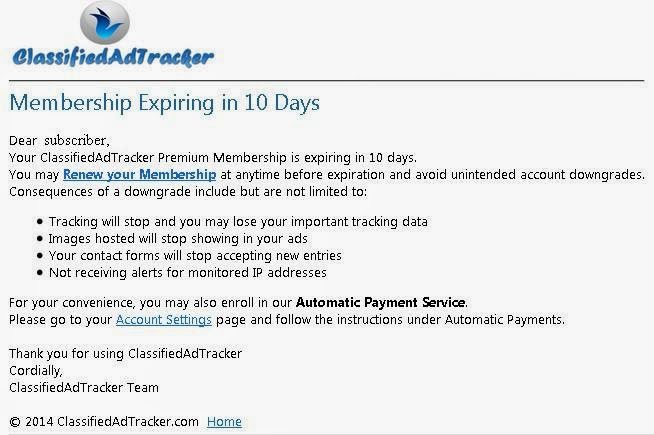 First of all I would like to point out that I have been using this particular service for a long time and for the most part have been satisfied with it. Although many people didn’t realize it before CLAT was not only useful for tracking your ads on Craigslist but could be used on many other advertising and blog sites as well.

Since the infamous “crackdown” imposed by Craigslist (especially pertaining to the real estate section of the site) CLAT has changed its name from Craigslist Ad Tracker to Classified Ad Tracker but the web based software is essentially the same and still very useful. Recently however I discovered something about the service that I did not realize before.

There are variable ways to monitor the activity of your ads using CLAT. One of them is to simply input the text of your ad into the “Tracker Installer” section of the software which will then install what is known as a tracking code. All you need to do then is to copy the modified ad and post it as usual. The process takes only seconds once you’re logged in and depending on the site you are posting on you are able to track how many people view your ad as well as how many people actually “click” on the link taking them to whatever website you want them to go to for more information. I have found it to be fast, efficient and an excellent tool to determine which of my ads are getting the most attention.

Due to an oversight on my part I had once neglected to pay for the service and allowed it to expire for a few days, no big deal right? WRONG! I discovered something that I was not aware of before. If you are posting ads using the installed tracking code provided by the software guess what happens if you discontinue the service? Your ads can no longer be seen! Now that I think about it that makes sense but I didn’t realize it until I failed to pay the fee on time. When viewers click on your ad instead of seeing the actual ad they will see a message stating that your ad has “expired”. I have seen this on Craigslist, backpage and some other sites when I allowed my membership to lapse but I wasn’t aware of it before then.

I’m not saying that this is unfair in any way but I am saying that you had better be aware of it if you are currently using or plan to use this software in the future. My biggest concern is not failing to pay the bill on time (that was my fault) but what if you decide to discontinue the service permanently? The end result will be that ALL of your ads that contained tracking codes from CLAT will no longer be viewable. You will need to replace the “link” that was inserted by CLAT or to repost every one of your ads. That’s a BIG job if you have hundreds or even thousands of ads and blogs that you are tracking using this or a similar service.

http://www.sellcvilleandrvahomes.com/
Posted by Unknown at 12:16 PM