Electricity is not Always Your Friend 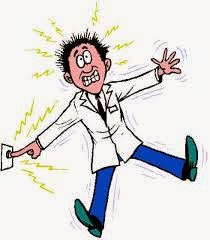 Having electricity in our homes is something that we all take for granted. It is something that we don’t even think about unless there is a problem such as a power outage or an outlet that doesn’t work. Unfortunately thousands of people are injured or even killed in their homes every year because we simply forget how dangerous electricity can be. I’m sure that no one needs to be reminded not to stick their finger into an electrical outlet but there are some simple steps that we can take to prevent anyone in our home from being one of the thousands that are reminded every year that electricity must be respected.

Frayed Cords are a Common Problem
Although it’s something that we never seem to do it is very important to check the condition of the electrical cords on all of our devices and appliances. Not only can a worn cord cause a fire but touching it can result in an electrical shock. Remember, we are not the only persons in our homes and children as well as our pets are especially susceptible to this type of accident. It only takes a few moments to inspect our entire home and it is time very well spent.

Hidden Cords Hide Problems
This is one time that “out of sight, out of mind” is a very bad idea. Many times when people need to use an extension cord they will try to conceal it so that it is not obvious. While this may keep our home looking neat and tidy it is a very dangerous practice. Electricity simply does not belong under carpets or furniture. Walking on an electrical cord under carpet or a rug will cause it to wear very quickly and can very easily start a fire. Likewise, furniture can easily rub against an extension cord and damage it. If you need to provide permanent power to a particular area in a room it is much safer to install an additional outlet than to depend on extension cords.

There is a Reason that Most Receptacles Only Have 2 Sockets
This is one that all of us have probably done before. We use surge protectors or other devices to increase the number of things that we can plug into an outlet, right? Well, the truth is that overloading a single electrical circuit is not a good idea. Not only can it overload the circuit causing you to “throw the breaker” which will of course stop the electricity from working at all but too many devices on the same circuit can cause heat which can be a fire hazard in itself. Again, your best bet is to plug electrical devices into different outlets or to have additional outlets installed.

Pull the Plug NOT the Wire
I can’t count how many times I’ve seen someone unplug something by pulling the wire. NEVER do this! Pulling the wire can cause it to break or separate from the plug at the end and that’s not a very good idea. Also remember to unplug something from the outlet and NOT from the device itself. As an example, if your phone is done charging unplug the charger from the outlet don’t just unplug your phone and leave the charger still plugged into the outlet. Remember, electricity is still passing through the wire in your hand. This could cause a shock (especially if your hands are wet) and also poses a fire hazard.

Common sense goes along way when dealing with electricity. Never work on or take apart an appliance unless it is unplugged first. Did I ever tell you about the time my uncle tried to remove a piece of toast that was stuck in the toaster WITH A FORK? You get the point, think before you act and give electricity the respect that it deserves.

http://www.sellcvilleandrvahomes.com/
Posted by Unknown at 1:40 PM