Why MY Super Bowl Party is Better than Yours! 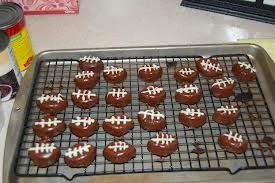 If you are a major football fan than this is your favorite time of year! There’s nothing quite like Super Bowl Sunday but if you’re like me you have a decision to make. “Should I host a Super Bowl at my home or is it better to go to the local sports pub?” That’s one question that I can’t help you with but here are some great party tips if you decide to enjoy the game this year from your very own 50 yard line seats.

K.I.S.S.
You heard of the “K.I.S.S.” theory before, right? It stands for “Keep It Simple Stupid” and I think that’s some good advice if you’re having friends and family over for the big game. It’s easy to decorate using a football theme if you choose to. The local dollar store is an inexpensive way to find some nifty little items such as disposable plates with a football printed on them and maybe some matching napkins. Streamers with similar colors to one or both teams will help set the mood and if you can find some of those little inflatable footballs to hang around the room that would be a nice touch too. The point is you don’t need to spend a lot of money or time to create an awesome football themed décor that everybody will notice.

The Anti Thanksgiving!
I consider the food at a good Super Bowl party to be the opposite of a traditional Thanksgiving meal. Think about it; the object here is to not be seated at a table. The dining room table is replaced by the big screen and that’s where the action is. No formality here, just sticky finger foods and lots of napkins! Make sure to serve everyone’s favorites such as chicken wings, chip & dip & pizza. I also think that more filling items such as chili and BBQ are awesome too. We all have our favorites but make sure nobody leaves hungry, that’s the mark of a terrible party. If you have the space I suggest setting up some small tables where quests will be sitting during the game and placing snacks within arm’s reach if possible. Eating is one thing but “munching” is another and everybody likes to snack during the game!

Keep in mind that there’s no reason to use real silverware and cutlery for this type of event. Make it easy on yourself and do it the disposable way. The host should have fun too!

Variety is the Spice of Life
As you know not everyone enjoys the same beverages. Although a big part of every Super Bowl party is the refreshments it’s always possible that some guests don’t drink alcohol or choose not to that particular evening. Provide a good choice of non-alcoholic beverages as well to keep everyone happy. Again, if you have enough room to spare set up ice filled containers with all of the assorted beverages within easy reach of your guests and allow them to serve themselves. They’ll appreciate it and you’ll actually have some time to enjoy the game. Did I mention kegs? It’s a thought!

Enough is Never Enough!
Let’s face it, running out of food or drinks before the night is over is a tragedy! Buy more of everything than you think you’ll need. It won’t go to waste and you can enjoy the extra goodies (if any) at a later time. Be sure to include a good variety so that everyone is satisfied.

No Standing Allowed
It’s happened to you and it’s happened to me. There’s nothing worse than being at a get together where there’s nowhere to sit! People often bring a friend that you weren’t expecting. Make double sure that you have ample seating for everyone that shows up. If you don’t have folding chairs or a back-up plan you could ask to borrow some from friends or even rent them if necessary. What about those folding chairs in the garage or those camping chairs stored in the attic? If worse comes to worse you could even sit people on the floor with blankets or pillows to make them as comfortable as possible.

My final word of wisdom for your big bash? Can openers! That’s the one thing that everybody forgets! One can opener just won’t cut it at a Super Bowl party. Be sure to pick up 3 or 4 spares for the game and place them close to the bottles. After all, what’s a football party without an ice cold bottle of Heineken?

http://www.sellcvilleandrvahomes.com/
Posted by Unknown at 9:37 AM